This tutorial describes the information and usage on how to secure boot i.MX8MM chipsets using HABv4. The platform used in this tutorial is an Engicam Ctouch 2.0 based on i.M8M Mini chipset.

This tutorial is an addon to an already existing i.MX6 Secure Boot tutorial. The boot process for i.MX 8M family (including i.MX 8MQ, i.MX 8M Mini, i.MX 8M Nano and i.MX 8M Plus) is little different compared to older i.MX6/7 platforms which will be outlined in this tutorial.

For practical purposes and to make this tutorial more understandable, i.MX8M Mini based CTouch2.0 carrier board is used.

The i.MX family of applications processors provides the High Assurance Boot (HAB) feature in the on-chip ROM. The ROM is responsible for loading the initial program image (U-Boot) from the boot media and HAB enables the ROM to authenticate and/or decrypt the program image by using cryptography operations.

The main features supported by the HABv4 are: 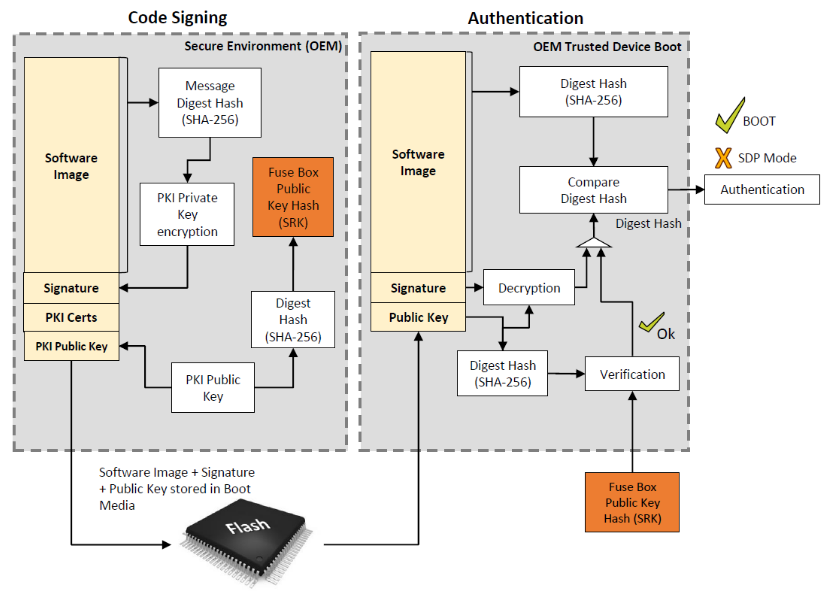 HABv4 authentication is based on public key cryptography using the RSA or ECDSA algorithms in which image data(for instance u-boot binary) is signed offline using a series of private keys. The resulting signed image data is then verified on the i.MX8M processor using the corresponding public keys.

This key structure is known as a Public Key Infrastructure(PKI) tree. Super Root Keys, or SRK, are components of the PKI tree. HABv4 relies on a table of the public SRKs to be hashed and placed in fuses on the target.

The i.MX Code SigningTool (CST) is used in this guide to generate the HABv4 signatures for images using the PKI tree data and SRK table. On the target, HABv4 evaluates the SRK table included in the signature by hashing it and comparing the result to the SRK fuse values. If the SRK verification is successful, the root of trust is established, and the remainder of the signature can be processed to 1authenticate the image.

The U-Boot image to be programmed into the boot media needs to be properly constructed i.e. it must contain a proper Command Sequence File (CSF).

The CSF is a binary data structure interpreted by the HAB to guide authentication process, this is generated by the Code Signing Tool[1]. The CSF structure contains the commands, SRK table, signatures and certificates.

The boot flow on i.MX 8M family devices are slightly different when compared with i.MX 6, i.MX 7 series device. The boot flow changes are due to the different architecture, multiple firmware and software components required to initialize the device[I]. 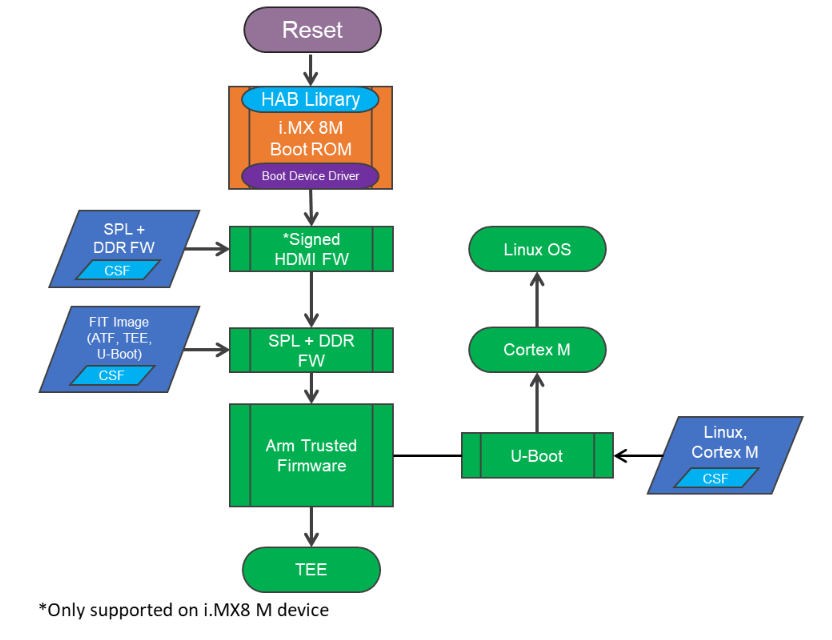 On reset, ROM code reads the efuse to determine the security configuration of the SoC and the type of the boot device. The ROM then locates flash.bin, layout shown in Figure IV. 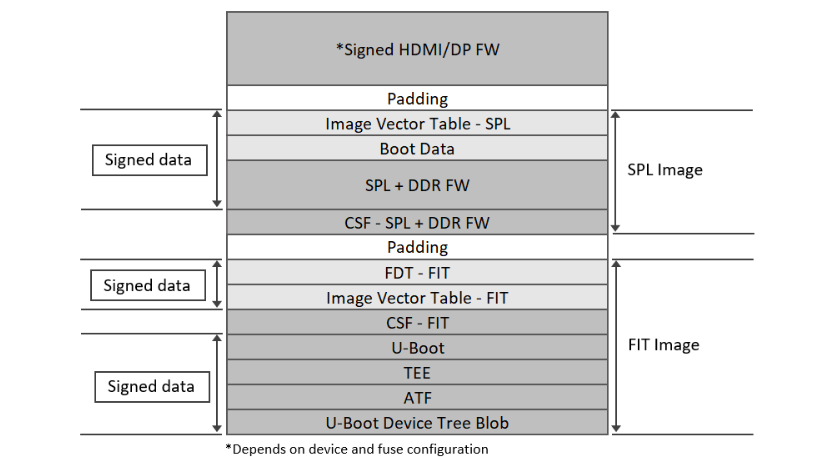 The above Figure shows 2 CSF binaries required, one per verification stage:

The ROM code first reads the Image Vector Table(IVT) and identifies the CSF location. It verifies and loads Second Program Loader (SPL) and DDR firmware onto OCRAM. It verifies the authenticity of the SPL binary both in memory and flash against the signature embedded in the CSF. This can be seen as the first stage verification. If signature verification fails, execution is not allowed to leave the ROM for securely configured SoCs, also called “closed” devices.

For an open device (meaning the fuse related to configuring SOC is not yet programmed), even if signature verification fails one will be able to see HAB events which will tell the programmer if the image would pass the authentication process.

During Verification, HAB evaluates the SRK table included in the signature by hashing it and comparing the result to the SRK fuse values. If the SRK verification is successful, this establishes the root of trust, and the remainder of the signature can be processed to authenticate the image.

If it succeeds (or if the device is open), the ROM code goes loads and jumps to SPL. SPL initializes the clocks, PMIC, LPDDR4 and UART. SPl then loads and verifies the rest of the components using the HAB APIs to extend the root of trust.

A FIT image is used to package all the components rtequired for i.MX8M mini which are:

Once the DDR is available, the SPL code verifies and loads all the images included in the FIT structure to their specific execution addresses. This is the second stage and if the verification succeeds, ATF is executed which will in turn execute U-Boot.

The HABv4 APIs can be used to extend the root of trust additionally tothe Linux Kernel and Cortex-M images and can be authenticated at bootloader level. 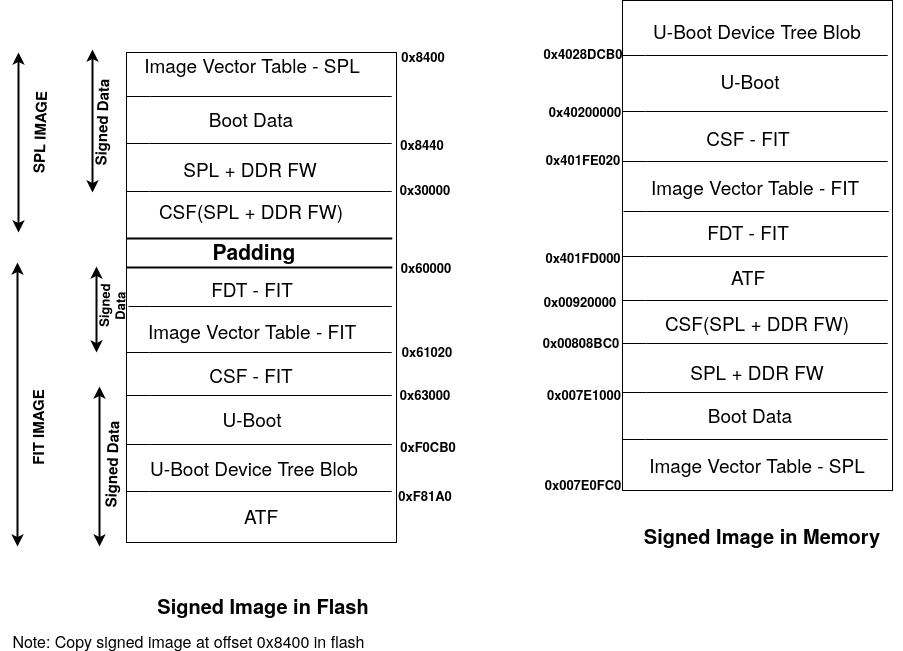 The below procedure outlines on how signed secure boot has been created with Engicam i.CoreMX8M MINI CTouch2.0 board.

Create a serial file with an 8-digit content. OpenSSL uses the contents of this file for the certificate serial numbers.

Create key_pass.txt which contains your pass phrase that will protect the HAB code signing private keys.

Private keys will generate on keys directory and corresponding Certificates are placed in the crts directory.

There are two files since we have two stage bootloader, csf_spl.txt and csf_fit.txt. Create a directory csf and copy both the files from u-boot/doc/imx/habv4/csf_examples.

For csf_spl.txt, in the Authenticate Data section replace Blocks with spl hab block content above:

For csf_fit.txt, in the Authenticate Data section replace the first line in Blocks with sld hab block content above and the next three lines by the output provided by the below command:

The resulting Authenticate Data section in csf_fit.txt should be:

Flash signed_flash.bin onto SD card and power-on the board

The above is the bootlog and hab status doesnt show any HAB events meaning the signed images generated are as per procedure and each stage has verified the other successsully without any errors.

The fuse table generated in the above process is what needs to be flashed to the device. U-Boot fuse command can be used for programming eFuses.

Once the eFuses are programmed check for any errors using hab_status command. If there are no HAB events then we can close the device implies Secure Boot is enabled.